Thanks for visiting! In case you’re curious, here’s my life story. … abridged, slightly.

I’m a writer, editor, researcher, and former dancer living in Burbank, California with my husband Alex and our three beautiful, sweet cats (Tiger, Leeloo, and Arya). I used to dance professionally: teaching, performing, researching, reconstructing, and writing papers in historical social dance and percussive dance. I started ballet at age 5 and eventually got into jazz, tap, Broadway, and modern dance. I also love musical theatre. I saw my first Broadway musical when I was 8, and I was hooked. I guess it’s somewhat stereotypical that the first show I saw was Annie, but I was also obsessed with West Side Story–pretty heavy for someone that age. I wanted to be a star on Broadway, and eventually got a bachelors degree in musical theatre from the University of Michigan.

Problem is, as much as I adore musicals, it’s a very difficult road and I decided my skin just isn’t thick enough. I hate the idea of being judged immediately by your looks, regardless of what your abilities may be, and I didn’t want to pursue Broadway as a career anymore. I wasn’t sure what I wanted to do, so I just continued with my classes, taking lots of electives, and got my degree.

I also started doing English country and contra dancing at age 8, and eventually learned English and Appalachian clogging, Irish step-dancing, Morris, rapper and longsword, vintage ballroom dancing, and nearly anything else I could get my feet on. I developed a fierce love for these under-appreciated and understudied dance styles, and started pursuing that academically. I got my masters degree in dance from American University, creating my own studies for vintage (mostly 19th and 20th century) social dance. My thesis was a lecture performance comparing the cancan and the Charleston called “What Goes Around, Comes Around.”

I met my husband Alex at a mutual friend’s wedding. Actually, we had met before that, in the house that would eventually become ours, but he was married to another friend at the time, so I barely spoke to him then. I had heard about their divorce, and saw him at a dance in that same house in our community, but it was at our friend’s wedding that we started dating. He immediately joined my dance company and became my partner, in dance and in life. He amazes me every day.

Our gorgeous house in College Park, Maryland, had a ballroom in it. Yes, a ballroom! It was pretty awesome. We were the center of our social circle (obviously, with a party house like that), and we held dances monthly, as well as semi-regular game nights. I also taught ballroom, tap, step dancing, and other dance forms around D.C., and I had a performing company called Centuries Historical Dance. We created a DVD about dances from the 1890s to the 1940s that was pretty well received, and I’m pretty proud of it.

The background picture on this site is one I took at an 1890s ball I attended in Prague, in 1996. 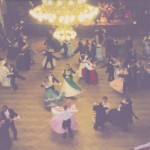 I worked as the acquisitions editor in music, dance, and theatre for an academic publisher, Scarecrow Press, for five years. I worked on more than 200 books in the arts and pop culture, editing and writing promotional copy for books and proposals. After that, I was an English editor and questions developer for the National Foreign Language Center, part of the University of Maryland, editing English translations of foreign language documents, and writing notes and questions for assessment tests.

In 2012, Alex and I gave up our gorgeous ballroom house to move to Los Angeles to pursue our dreams of working in entertainment. I’m now working as a freelance entertainment writer, while Alex is doing motion graphics for television. I’m currently doing television recaps of So You Think You Can Dance, Dancing with the Stars, and The Good Wife for the sites Reel Life with Jane and Los Angeles magazine, while pitching stories and writing in my blog. I also assist Susan Glatzer, a former executive at Paramount Pictures, with her current labor of love: a documentary on swing dancing.

Now that you know a little about my background, here are some of the ways I can help you.

This site uses Akismet to reduce spam. Learn how your comment data is processed.